'Non mariners' guide to ship construction and operation is a basic guide to load lines. 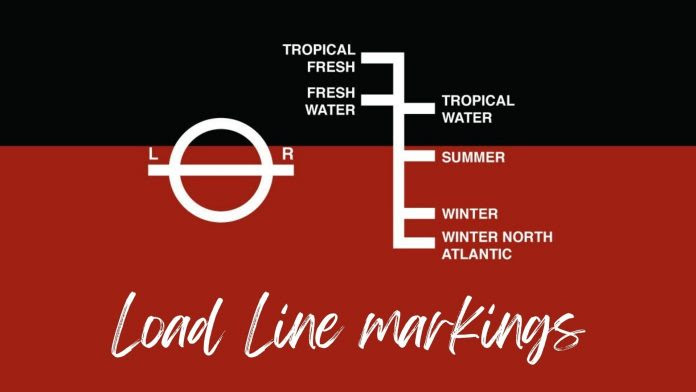 A ship’s waterline is the line where its hull meets the surface of the water. A load line, also called Plimsoll mark,1 is a marking indicating the extent to which the weight of a load may safely submerge a ship, by way of a waterline limit. It is positioned amidships on both sides of a vessel’s hull and indicates the draft of the ship and the legal limit to which a ship may be loaded for specific geographical areas and seasons of the year. The purpose of the load line is to ensure that a ship has sufficient freeboard (the height from the waterline to the main deck) and thus sufficient reserve buoyancy (volume of ship above the waterline). It should also ensure adequate stability and avoid excessive stress on the ship’s hull as a result of overloading. Ships intended for the carriage of timber deck cargo are assigned a smaller freeboard as the deck cargo provides protection against the impact of waves.

Temperature will affect the load line level because warm water provides less buoyancy, being less dense than cold water. The same is the case with salinity, because fresh water is less dense than salty seawater.

The exact location of the load line markings is calculated and/or verified by a classification society, which then issues a load line certificate.

The first international convention on load lines was adopted in 1930. It was based on the principle of reserve buoyancy. In 1966 the IMO adopted a new convention, determining the freeboard of ships by subdivision and damage stability calculations. The International Convention on Load Lines 1966 applies to all vessels engaged in international trade and determines the permitted draft/freeboard for a vessel in different climate zones and seasons, which are defined in a special international load line zones and areas map.

Load line markings are as follows:

TF           Tropic Freshwater – the deepest permitted draft considering the relatively benign weather conditions in tropical waters and the fact that the vessel floats deeper in freshwater due to lower density than in saltwater.

Draft surveys
In addition to the association with reserve buoyancy and stability, load lines make it possible to determine, with reasonable accuracy by draft survey, the amount of cargo on board a ship.

A draft survey is used to determine the weight of any materials being loaded into or discharged from a vessel. It measures the displacement of the water both before and after the loading or unloading, with the resulting difference between the two displacements representing the weight of the cargo.  A draft survey is based on solid mathematics but usually involves one of the ship’s officers gauging the draft of the vessel from visual reference to the vessel’s forward, amidships and aft draft marks along with the ascertained list the vessel may have. The combination of pure science and practical experience allows the officer to calculate the amount of cargo on board to within more or less 0.5 per cent of the actual quantity.

In many ports, a draft survey is the only way of independently confirming the amount of cargo the shipper declares as having been shipped and thus the only way of checking the accuracy of the quantity stated in the bill of lading (which is normally based on the shipper’s figures) and how much cargo was on board the vessel prior to the start of discharge.

Footnotes
1 After Samuel Plimsoll, a UK Member of Parliament who campaigned in the 1870s for the introduction of legislation making it compulsory for every vessel to be clearly marked with a line which would disappear underwater if the vessel was overloaded. Source - Gard.