Carriage of containers on bulk carriers

Carriage of Containers on Bulk Carriers - A Practical Guidance 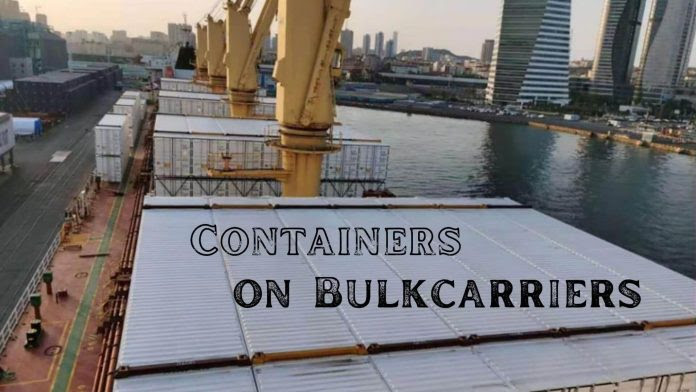 Are conventional bulk carriers suitable to carry containers? This question has been raised by several industry bodies and in this article we will look at the technical and legal implications of such conversions. Carriage of containers on bulk carriers is a hot topic, and careful planning and preparation is necessary to ensure the safety of the crew, ship and cargo.

If containers are carried as deck cargo, bridge visibility (SOLAS V Reg. 22) and COLREG requirements must be considered. The so-called castle stowage of containers obstructing max permissible blind sectors for visibility is normally not accepted.

Voyage planning: On a container vessel weather routeing is a very important part of the voyage planning process. Heavy weather, resulting in parametric and synchronous rolling, has been a common factor in nearly all claims related to container stack collapses. Readers interested in knowing more would find GARD's 'Why do containership stacks collapse and who is liable?’ useful. Advanced weather routeing software and services are available, and operators should consider adopting these technologies for the safe execution of the voyage. Appropriate weather limiting factors must be defined or rather re-defined, such as the maximum wave and swell height, as these factors will be different depending on whether the vessel is carrying bulk cargo or containers.

Monitoring during voyage: During the voyage, the crew will need to actively monitor the lashings as they are likely to slacken during the voyage due to vessel movements. In addition to the lashings, the vessel will also need to monitor stability conditions during stages of the voyage. Bunker consumption during passage will affect the stability of the vessel which will need to be compensated with ballast, especially if the vessel has a low GM at departure from load port. Source - Maritime Cyprus - for full article click here.

For any further questions of digital navigational solutions:  digital@edatallc.com